This is probably the last of the small paintings on paper, at least for a while.  I’ve started doing the same kind of thing — but a lot more of it — on a 16″x20″ canvas.  That’ll take a while.  Lets hope I don’t lose interest!  🙂

After laying down a yellow background, I cut some hopefully interesting shapes out of masking tape and masked parts of it.  Then it was just putting down blobs of paint and letting them form “their own” shapes, blue, green, and red.  That’s the part that comes most unfiltered from the murky depths my subconscious.  Next I added some black and white dots.  Then I tried to keep going past the point where I usually would stop, past the point of feeling it was done, which was hard to do.  But I figured to get the level of complexity I want, I have to just keep painting.  It was surprising that this was difficult.  When it feels done, there also comes the feeling that even a single thing more will mess it up, that any more would be too much.  Anyway, that’s the white hash marks and the small red squiggles.  This is when it hit me that I needed a bigger canvas to really do more — enter the 16″x20″.  But I think it turned out well, and as I write this I learn that my daughter does too, so there you have it!

So tell me, what is this chaos of colors?  🙂

Well there it is. “Their first task”.  Not much to say about it; I stenciled some circles, painted some green, made some marks and dots.  Kinda simple, but I kinda like it.  Unintended minimalism maybe?

I hope a picture is worth a thousand words, because I just don’t seem to have any more…  🙂

I’ve caused some confusion by calling these ‘small paintings that don’t matter‘.  They are small, just 8½ by 5½ inches.  But fear not,  they do end up mattering, at least to me.  This is a trick I play on myself — starting out thinking ‘it’s just a little piece of paper, it doesn’t matter’ is actually a very liberating thought that frees creativity.  Thinking “it doesn’t matter”… then it doesn’t matter if I mess it up.  It’s just a piece of paper, I can just throw it away.  That removes a lot of hesitation and opens the creative flood gates.  Really these  are experimental for me.  All that said, I’ve done 9 of these now and haven’t really messed one up yet.  I should probably move back to canvas with this…

For this one I only used some of my favorite colors.  Brilliant blue, bright aqua green, bright green, pyrrole red, and cadmium yellow light.  And black to make them all jump out.  And of course paper curls as the paint dries.  “Other Faculties” here practically curled up into the fetal position with all this paint!  Not shown — glue clamps and my thumb on all four corners holding it flat for the photo!

With this one I started experimenting  with stencils and masking.  The round dots were stenciled with the top of an old Tylenol bottle that I sawed off.  Four rectangles were masked with masking tape.  The whole thing started with a gray wash, glue clamps holding the four corners down to a piece of plywood so it wouldn’t curl too much.  That worked!  🙂

So the masking tape preserved some of the wash and adds interest with negative shapes.  Finished it off with some pyrrole red, and some dots.  This one came out pretty well I think!  Especially considering I had a cold when I painted it (still do – ’tis the season) and my head was in a fog.  This one definitely matters.  🙂

As always, comments and especially interpretations are more than welcome, they’re hoped for!  🙂  Tell me what they look like to you or what you see.  My belief is that the artists opinion of what he’s painting — especially with abstraction — is no more valid than any viewer’s opinion.  This is especially the case with non-representational abstraction like these.  This is what I think Duchamp was saying in one of my favorite quotes about art:

“The creative act is not performed by the artist alone; the spectator brings the work in contact with the external world by deciphering and interpreting its inner qualifications and thus adds his contribution to the creative act.”  -Marcel Duchamp

Further, I really had very little in mind other than experimentation and technique when I was painting these.  So by all means tell me what you make of these, and everything I paint!  🙂

Here are the fifth and sixth “small paintings on paper that don’t matter”, that I did two weeks ago.  In this one I was exploring mark making, division of space, and placing yellow and red next to black for contrast. 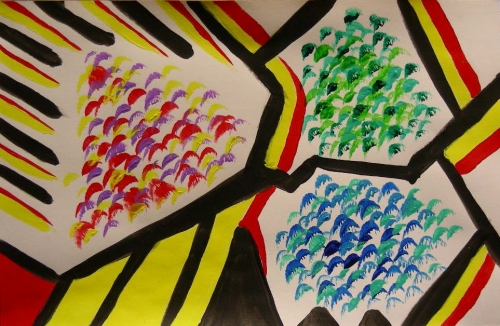 These paintings need names, so borrowing an idea from sbmacinnis and the book meme I’m sure you’ve all seen, I grabbed a book offa da shelf, flipped to page 42 (because that’s the answer to the ultimate question), and found something cool on the page.  “Take a look behind the rhetoric”!  – Noam Chomsky, from Bill Moyers’ A World of Ideas.

I’m not sure what to say about this one.  I was no longer thinking verbally, I was just painting.  🙂  Throwing the dart, this shall be called… “We have covered considerable distances”!  – Patrick Moore, Travellers in Space and Time.

Here are two more of the small-paintings-on-paper-that-don’t-matter, that exploded from my brush in the creative outburst of last weekend:

By this time I was pretty much just scribbling with the brush, but the colors make it work.  Saved by Liquitex!!  Phthalo green, phthalo blue, cadmium yellow light, and pyrrole red dripped on just to get all the primaries in there.  I was definitely just composing with color by this point!  😀 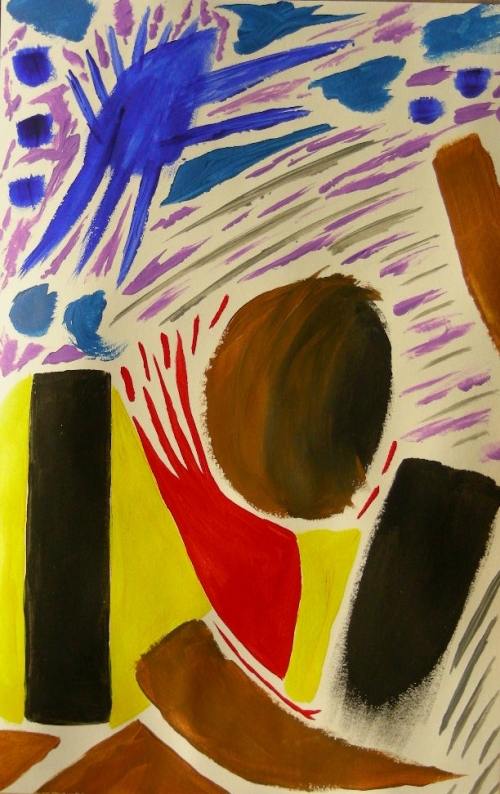 Some regrettable color choices here, but more exploration of “the theme of shape” lol.  The flying, floating, and swirling things kind of conflict with the ones that want to be more solid and fixed…  That seems to create a tension, though it was unintended…  Then again, I did not intend anything with these, which was kind of the point.

In addition to being a truth I was recently blinded by the profundity of, yes, that’s a Portal 2 reference.  🙂  But I’m writing about art today.

I have long found it inexplicably difficult to paint in a certain abstract way.  While it seemed perfectly straightforward and understandable in technique, for some reason I could not bring myself to do it, even though I wanted to and tried to.  It’s a free and loose style of abstract painting, if you can call the broad swath of abstraction that I’m referring to a ‘style’.  My attempts to paint this way would invariably veer either toward my usual crisp, careful lines, or to abstract landscapes.

Some examples from other artists of the kind of thing I’m talking about:

Most of the above it seems are being sold as ‘decor’, but personally I think they’re much more than that and I would not belittle them with that term.  They’re abstraction without a quickly determinable theme, if there is any, and that just seem a free and loose composition of colors and shapes.  And they’re stunning and beautiful!

Try as I might, my own attempts at this sort of thing always missed the mark, imo:

PatternsThatConnect does this ‘sort of thing’ fairly often, so out of my own frustration I asked him pretty much straight out how he does it.  He graciously answered, “I think it helps that it is small and on paper. It is easier then to feel like it doesn’t matter what it is or whether it is any good.”

In the immortal words of Keanu Reeves, Woah.  (‘immortal’ because he never stops saying it)

That was exactly what I needed to know!  I grabbed an 8.5″ x 5.5″ pad of paper I had and dashed out half a dozen small paintings on paper that don’t matter!  In a weekend!  And though there were a few missteps and regrettable color choices, they all came out pretty well I think!  It was a flood of creativity unleashed!  Finally I was doing ‘that sort of thing’!!  🙂  It was liberating!  It felt great!

Here are the first two:

The black shape, especially with the gold dots, seems to evoke a whale shark to me, giving the whole thing an underwater feel… 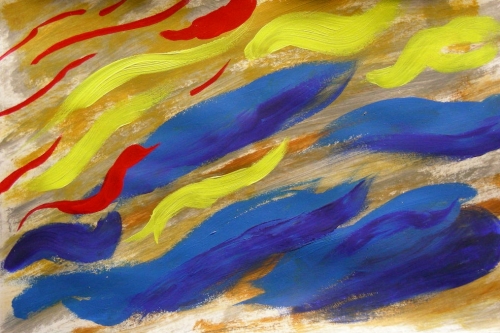 These could be clouds, or underwater, or things on the beach as a wave washes back out into the surf…  Whatever it is, it seems to have a lot of “Woosh!”