It’s done!!  Feels good to have finally finished a painting.  It’s been too long!  🙂 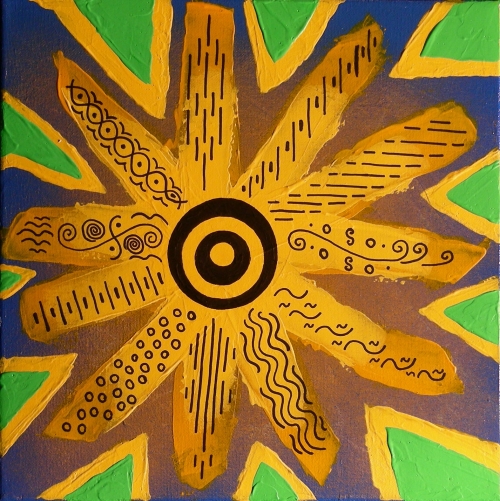 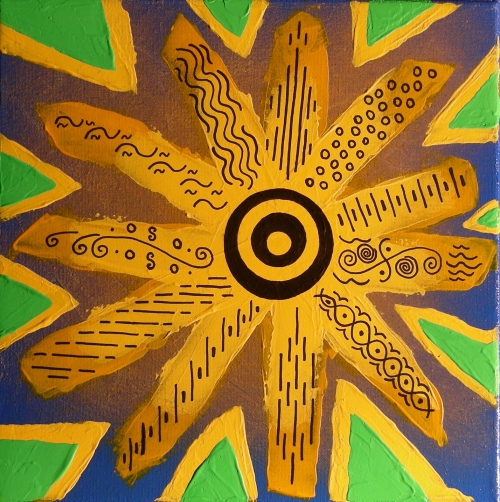 Still not done yet… 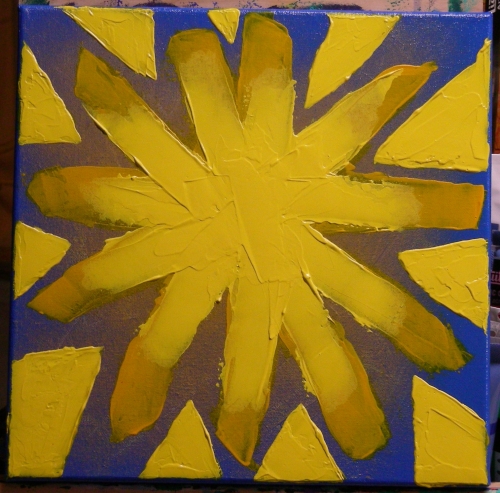 I really thought this one would be finished by now, but I ended up with less time to paint this week than I thought I’d have.  I did decide to stick with “El Asterisco Gigante” and finish it as that.  I can do the other thing I had in mind on another canvas.

I HOPE I can finish this one this weekend.  😀

Progress and another new one started 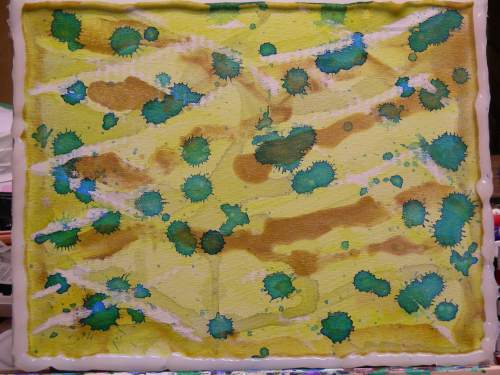 Before the splashes I added a yellow wash over the whole thing, but I forgot to take a picture of that before I started splashing around.  The yellow wash shows better the wax resists that I started with.  Sort of argyle.  The splashes were made with coffee stirs…  I’ve mentioned that I mix up my washes in graduated test tubes.  I dipped the coffee stir into the test tube with my finger on the end, like a glass pipette.  It all felt very “chem lab” until I held the coffee stir over the canvas and high above my head and let go!  Were this actually chem lab, something would definitely be on fire by this point.  What I got was a wonderful splat!  With tiny liquid ejecta radiating in all directions.  First the blue, then when that had dried, orange.  Like analyzing craters on other planets and moons, you can tell which fell from higher and lower by the strength of the lines radiating outward.  Usually those rays indicate new, fresh craters — geologically speaking — but all of these are new, fresh craters.  No dinosaurs were harmed in the making of this painting.

Ok, the new one I mentioned. That’s what? Six currently in progress? Oy.  I need to finish some of these.  I have been working more on the one with the alizarin crimson square, but I don’t want to show it anymore until it’s done so that there will be at least some surprise left.  It’s very close to done.

Pretty nice background huh?  Next I spray painted the edges brilliant blue as a border.  I wanted some over-spray on the canvas, but I got more than I wanted:

A little too much blue

So I hit it with some yellow palette knife again. 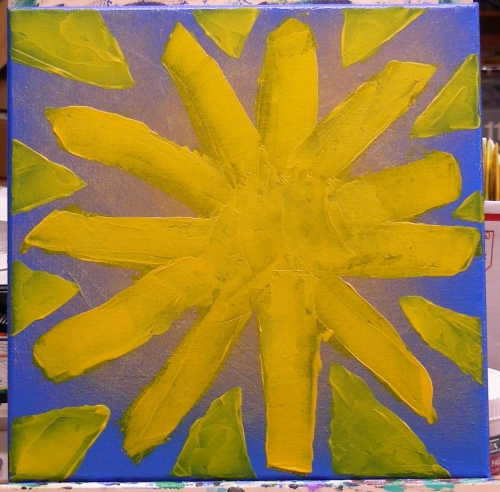 So the original background that I kind of liked is pretty much gone, but I can do that again.  This “el asterisco gigante” isn’t quite what I expected either, but I like it.  It will be much painted over too.  “El asterisco gigante”.  You have to say that in a deep, rich, Mexican announcer’s voice or it doesn’t sound right.  “El Asterisco GIGANTE!!”  Yeah, that sounds so much better than ‘giant asterisk’.  Anyway, this one is also already close to done.  The main thing will be quick and fun.  Except, maybe it needs some splashes before that…  Hmmm…

Last, Hello Australia and The Philippines!  Thanks for all the views!  Leave a comment and say hi!  🙂