Jupiter and one of it’s moons! Again!!

So the big white splotch fringed in crimson and magenta is the planet Jupiter, and I believe the faint blob to its left is it’s moon Io.  The faint dot to the right might be Ganymede, but the more I think about it the more I think its a background star.  It is more point-like and less of a fuzzy blob, which implies it’s astronomically further away.   🙂

Can you believe I pulled this off again??  Well I can’t!!  As amazed as I am that my camera can do this, it is still basically a point-and-shoot with no manual focus.  That is fine, until the auto-focus gets confused.  The above is an enlargement of Jupiter from the one frame out of seven that the camera did not insist on defocusing to the opposite extreme.

Here is what I enlarged the above from, Jupiter and Venus in conjunction March 16, 2012: 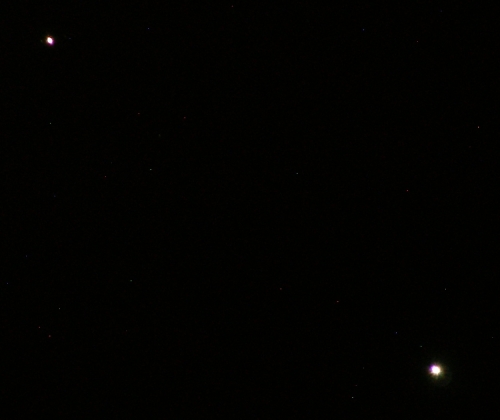 Venus and Jupiter are in conjunction these days, meaning they’re about 3 to 5 degrees apart in the western sky at night.  Very easy and very cool to see them.  I’ve been seeing them up there the past several nights and last Tuesday night I thought, what the heck!  I’ll take a picture!  I figured it’d just be two dots, but I would know what they were when it popped up in my screen saver and knowing I had seen them with my own eyes would be so cool all over again.  🙂  Here’s the picture:

Jupiter on the left and Venus on the right; Conjunction of March 13, 2012

But here’s where it gets really cool.  I took three frames with tripod and auto-timer, not really sure how well they’d turn out, then packed it in and went back inside.  Looking at them on my computer I noticed some suspicious specks…  and if I had not seen the same specks in all three frames I never would have believed it, but I actually captured some of Jupiter’s moons!! 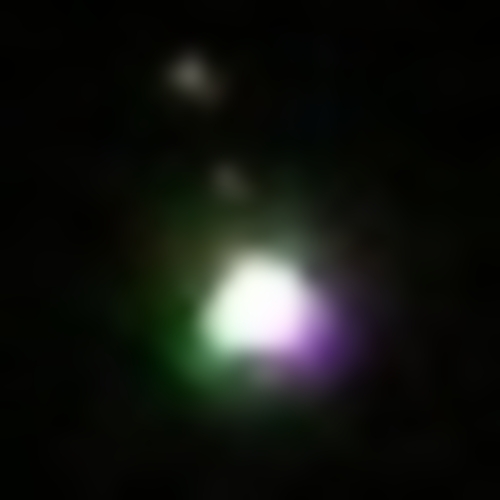 Enlargement from the photo above of Jupiter, Io, and Europa I think, March 13, 2012

According to this, I believe the speck just above the large blob (which is Jupiter) is Io, and the one above that is Europa.  This is with just my camera — not a telescope!  My camera is a Nikon Coolpix S4 — not even a DSLR with a serious lens, but what I guess you could call a ‘souped up’ snapshot camera…  I’ve never seen another camera design like it.  It has a focal length of 38-380mm, or 10x optical.  I was at max optical zoom for these shots of course.  There’s more digital zoom on top of that, but I… never go there.

I am so impressed all over again with my little 7 year old camera…  I was impressed when I bought it that I could just about fill the frame with the moon!  I mean Jupiter!!  And two of its moons!!  How cool is that?!? 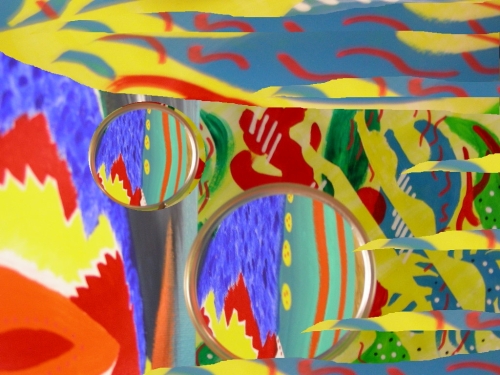 Had an idea to do abstract photography of abstract paintings.  So “Independence” here thus started with photographin’ of a composition of  Andlega Landslagi and Movement had Burgeoned.  Intrigued by all the reflective surfaces sbmacinnis has been using in his daily studio photographs lately, I incorporated a small concave mirror for additional reflectitude.  Took a bunch of photos of this and other compositions of my other paintings.  Last I finished it with some digital collage, using clippings from another photo of Movement had Burgeoned.  I named it for the best word on page 42 of the 12th book on the 4th shelf, 12 and 4 being random numbers.

Quite the technicolor puke, eh?  🙂

I spend a lot of idle moments pondering the nature of creativity.  I don’t think creativity is an ‘instinctive’ capacity, or maybe ‘innate’ would be a better word.  It’s not innate, like breathing is.  Breathing is something we’re born with the ability to do — it does not have to be learned.  Creativity is more like thinking, something we naturally start doing at some point in childhood, but that we can improve by learning.  We can learn to think “better” by learning reasoning, logic and critical thinking, for example.  Creativity is not just a “talent” in other words, I think it can be learned.  And if you do have creativity as a talent, you can learn to do it better.  Though of course what is “better” creativity has got to be one of the most subjective things ever.

What I also mean by saying creativity is not an instinctive or innate capacity is that creativity is not a ‘thing’ in itself, but is built from other, more basic things the brain does.  I’ve often said that creativity is knowledge, memory, and experience put in a blender, and spiced with inhibition.  You can hit “mix” or you can hit “puree”.  The above is closer to a “puree”.  🙂  Creativity is the arbitrary recombination of ideas.  Previously separate ideas that before may have had little to nothing to do with each other, like photography and painting perhaps.  Though both creative visual arts, the execution of each it seems could not be more different.  Composition is about the only thing they have in common — their processes and technical considerations are otherwise utterly foreign to each other.  And yet, they can be arbitrarily combined…  photographs of paintings, or paintings of photographs, or painting on photographs… or collage with paint and photographs, or sculpture using camera optics and paint, or painting cameras…

So thinking of creativity as the arbitrary recombination of ideas, seems to make it something you could improve at by practice.  If you’re looking for a theme for abstract art, maybe you could just pick two words at random from the dictionary and just run with them.   “Initial prow”, or “Djibouti madrigal” (ooh that’s a good one), or “loquacious Tam-O’-Shatner”.

Creativity is also usually directed at a purpose, which may seem antithetical to notions of ‘pure’ creativity (whatever that is), but if this were not the case creativity would never leave the mind to find manifestation in the physical world.  In visual arts creativity is most often directed at producing something that is in some way beautiful, or cool looking, or expresses an idea or a feeling, or is thought-provoking.  Innovation on the other hand, is creativity bounded much more by practicality and directed at producing something useful or better than what came before.  The proverbial ‘better mouse trap’ in other words.  Paintings don’t trap mice!  Paintings are mouse-friendly.  Paintings may even help mice sharpen their teeth or serve as luxuriant nesting material.

Well anyway, that’s what I’ve been trying to do at least since Horizons — improve at being creative, and ‘Independence’ and these thoughts about creativity are just where I am today. 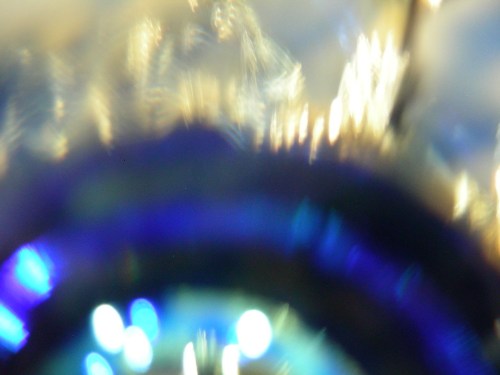 Had another abstract photography idea.  I have this blue drinking glass my daughter gave me one Father’s day.  It’s clear glass speckled with spots of blue glass, that slowly twist from top to bottom, as if the last step in making it was to twist the top about 60º.   The other day as I was walking from the man cave back to the kitchen for a refill, I was finishing the last of the water in it as I turned the corner in front of the floor lamp.  I saw the lamp through the bottom of the glass and was struck by the incredible play of the light.  So there you have it, that’s what you’re looking at here — photos of light through the glass. 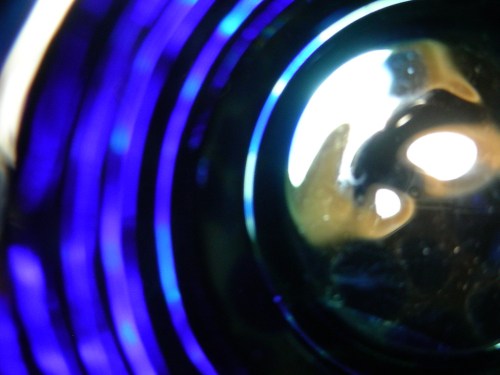 Lots of yummy blue in this one 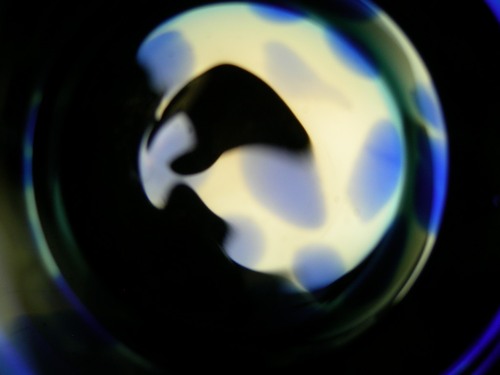 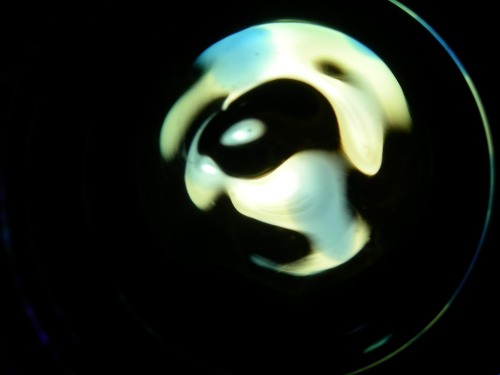 Portrait of Sigibert, masked and floppy-hatted Hero! Protector of the timid! Defender of the innocent! Guardian of Justice! Hark sidekick! A crime is being perpetrated! Fetch hither my marbles and wasps! 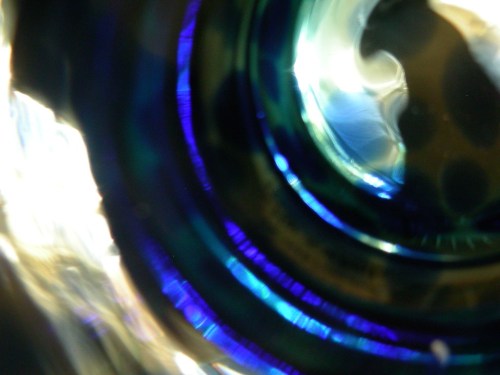 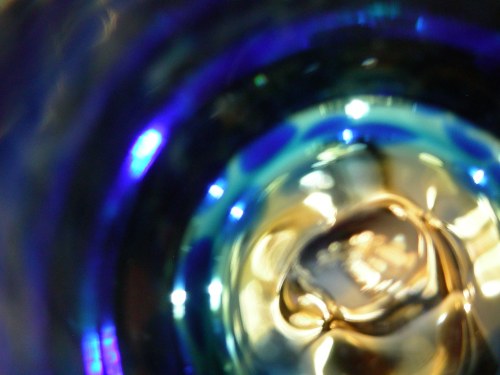 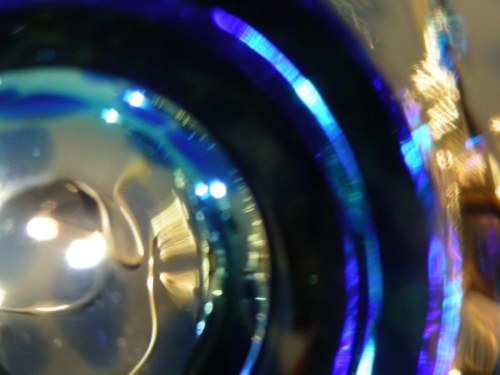 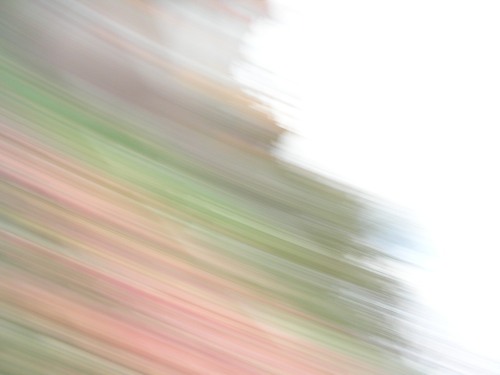 Last weekend I did somethin’ weird.  With my camera.  When my daughter asked me what I was doing, I said “Something weird.”  She needs to get used to the fact that her dad does weird stuff.  Thinking back on that now though, I think she already knows this.  Anyway, now I’m calling it ‘abstract photography’.

Four things came together that led me to this particular weird activity, though I am definitely not the only one doing this sort of thing.  First, reading Aaron Leaman’s awesome blog lately has given me a new-found artistic appreciation of ‘blurry photos’ if you will, or what I’m now calling abstract photography.  He’s really good — you should check out his work.  Second, I’ve been thinking lately about something I read years ago that some of the Dadaists — I can’t remember who or where I read this — wanted to incorporate random elements into their work.  As part of the Dadaist rebellion against the limited scope of what was at that time considered art, and more to the point what was not, they wanted their work to in some ways happen by itself, or at least to some extent be created not by the artists direct control in making the work.  They wanted it to be literally spontaneous — self-generated — not of their own doing.  Taken with this idea, I’ve been thinking of how I might do, or should I say cause, something like that.  I mean, I could pour and drip paints or washes onto canvas à la Jackson Pollock and let them run around as gravity and the terrain of canvas texture wills… but that just doesn’t interest me.

Then, third, I remembered this photo that spontaneously sprang into being on my phone about two years ago.  I do not remember taking it, do not remember ‘messing up’ a photo, and have no freakin’ idea what it is… but I love it.  It’s bright, blue and glowy. 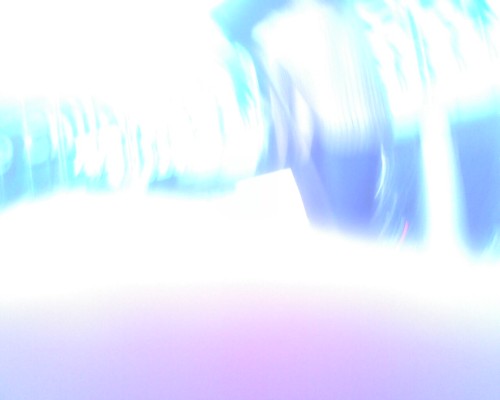 A gift from my phone

Last, I remembered an idea I had when I was first messing with video cameras as a teenager.  I wanted to tie the camera to the branch of a tree and suspend the camera just above the ground and swing it.  This I thought would make an effect of dizzying speed as the camera flew just above the grass and spun around.  Back then though, the camera I’m talking about recorded on full size VHS tapes and you had to carry it around on your shoulder it was so big.  And it was borrowed.  So I did not attempt this.  Later in life when I bought my own 8mm camcorder, I still did not want to risk it to this half baked idea.  But then last weekend!  This idea fell into place with the other three and I thought heck — my digital camera is not that heavy and it’s getting old anyway.  I wouldn’t be too broken up if I had to buy a new one.  So I strung it up and set it spinning  and swinging from the branches of various trees in my yard, using the auto-timer to attain the total Dadaist randomness of me having no idea or control over the composition of the resulting photos, beyond swinging the camera initially.

What resulted was even more awesome than I hoped, even from the first shot: 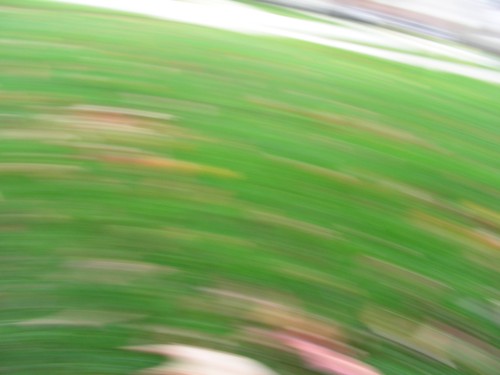 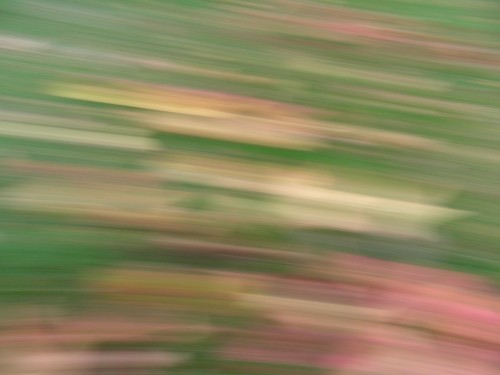 This one has a nice autumnal theme to it 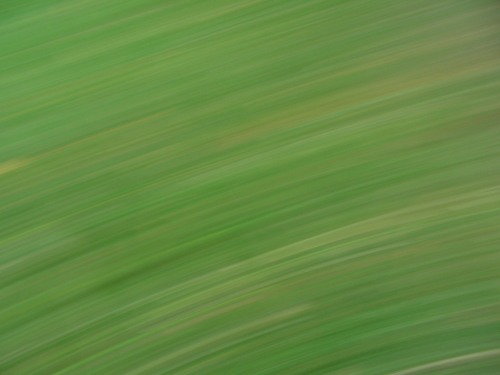 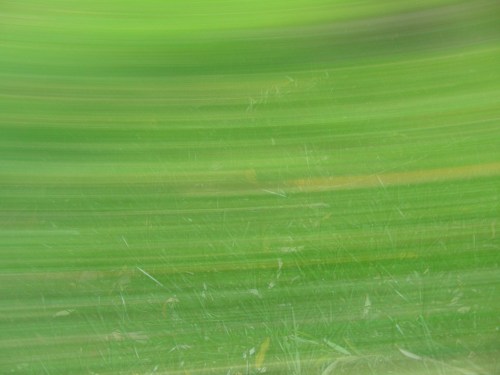 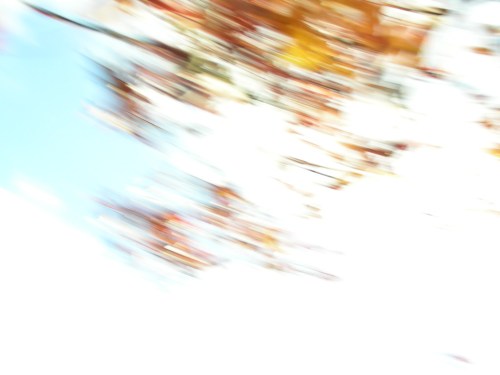 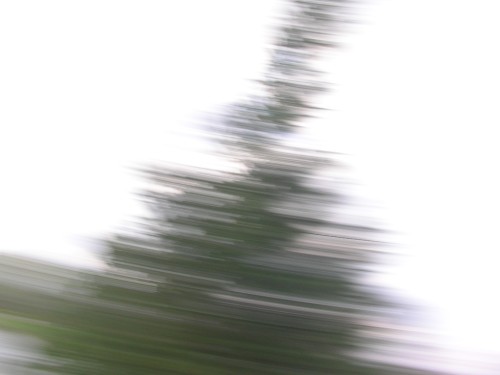 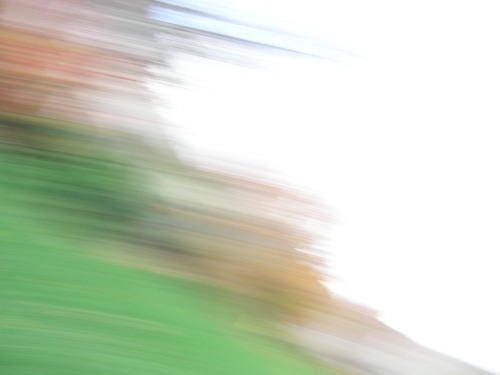 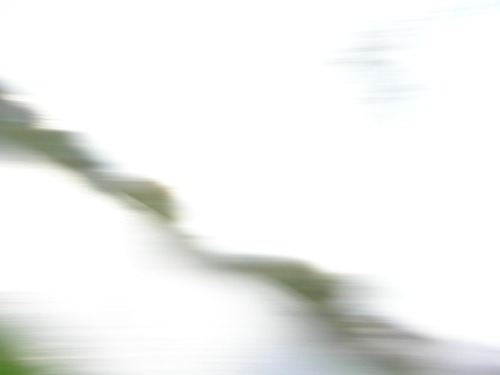 I still haven't figured out what this is, but I like it! 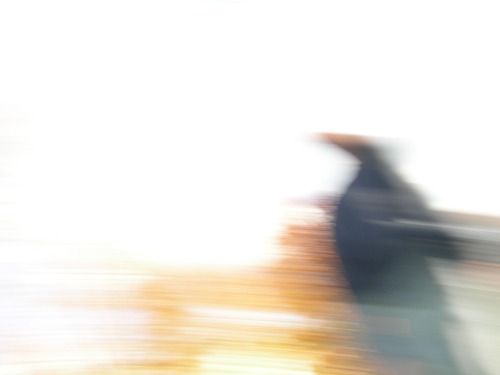 No idea what the black bird-shaped thing is. None. 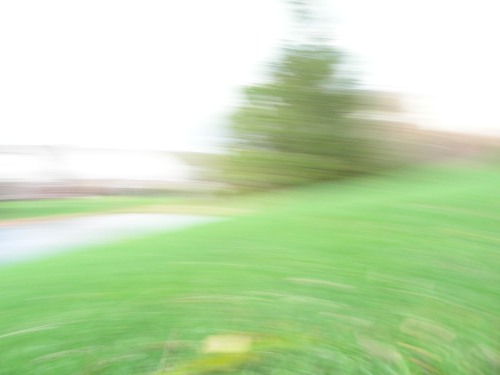 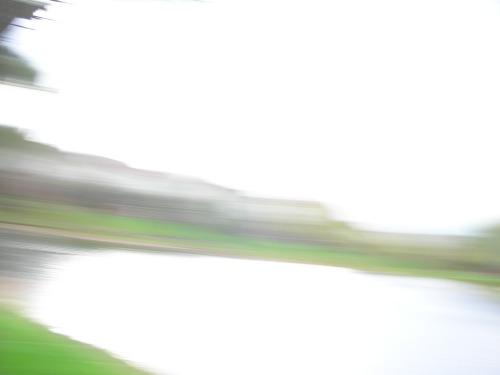 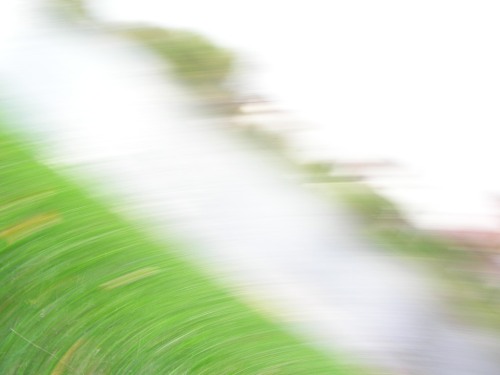 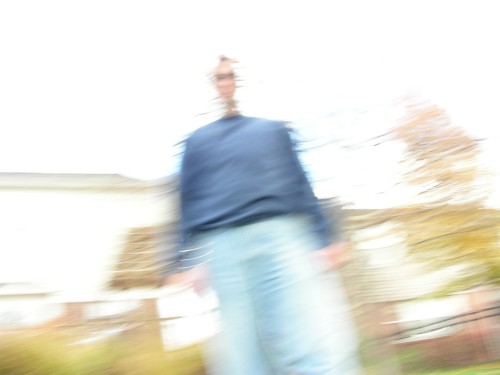 Is this a self-portrait or a picture the camera itself took of me?

And the string did break towards the end, but the camera is ok.  It landed in the grass…