But can any digital art really be called old?  Certainly not old like the Mona Lisa.  Heck, every bit of digital art is far newer even than Andy Warhol’s work.  Anyway these are old to me at least.  This was my main creative outlet from 2004 to 2009, before I started painting.  This was the first.  Realizing Microsoft Paint was very good for straight lines and broad expanses of perfectly even toned color, I did this:

I thought the lines guided the eye towards the middle, where there was nothing.  I decide to leave it that way and named it “Koan” after the Zen teaching ‘riddles’ that point to emptiness.  Then I made a whale. 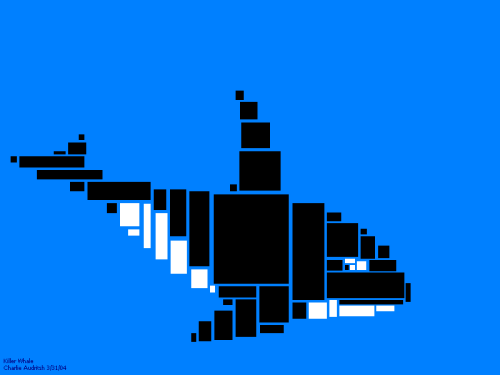 I wanted to represent a natural form with regularly aligned rectangles — two other strengths of Microsoft Paint as a media.  After deciding a horse would be too difficult for a first attempt, I chose something more hydro-dynamically streamlined.  I’m every bit as happy with this one today as I was the day I did it eight years ago.  🙂

So yeah, this is pretty much where my current trajectory through art started.  This is where I started after an ill-conceived 13 year hiatus on artistic activity.  Then after 87 of these I decided I really should try actual painting.